Proposals for the Cot Burn in the Toll Park

Community Council proposals for the burn in the Toll Park

The Cot Burn runs along the north side of the Toll Park, and so is sometimes called the Toll Burn. After it is culverted under the Cowdenbeath Rd it is joined by in the culvert by other burns from the west Binn and the combined waters are known as the Kirkton Burn. The Kirkton Burn runs along Glebe Place, under the road at Kirkton junction and emerges near the old doocot at Geds Mill Place. The Kirkton Burn is diverted into the attractive SUDS at Kirkton Rd, then goes into the tidal pond at the old Seamill site and is piped out to sea off the west breakwater.

Local residents have expressed concerns about the Cot Burn in recent years. The area has been looking shabby, neglected and overgrown. Rats have been seen scavenging near the school and in local gardens. As the burn runs in the bottom of an unnatural ditch, largely hidden from view by greenery, some local people didn’t know that the Cot Burn existed. As the area has become gradually urbanised and built up over the years, what used to be a natural stream running by meadows, has become either invisible in its culvert or ditch, or seen as a ‘problem’.

The Community Council engaged a landscape architect, UrbanPioneers, to assess and come up with proposals to improve the amenity value and biodiversity potential along the banks at Cot Burn, concentrating on the south side. Landowners at the south side are the Toll Community Centre at the east end and Fife Council elsewhere in the park.

Initially our proposals included watercourse works to attempt to partly re-naturalise the burn, which runs in a ditch with steep sides where there is some bank erosion. However, it has proved prohibitively difficult and expensive to do any watercourse works, as Planning Permission would not be given without a full Flood Risk Assessment (FRA). Therefore, we have reluctantly had to remove all the watercourse works, including a viewing platform, from our proposals. (A viewing platform could be added in future years if the considerable funds for this could be identified.)

Public consultation at Burntisland Primary School (Christmas 2019) and the Toll Community Centre (2020) and an online survey (now closed) was overwhelmingly positive. Thank you. One dividing issue was how much of the length of the burn should be fenced. As we will not now be able to do any bank re-profiling or other watercourse work, we have decided to remove the existing ugly fencing and replace it entirely, but with a more open fence with gates to access the burn area for on going vegetation management and litter picking. This will be a wooden round top palisade fence style.

We propose to add a new path and access to the park at the north east end that will provide an off road route to the school, community centre, playing fields and park. This will also create a new off road route across the north of town between the Widows Land Estate, golf course and east Binn paths and the Kirkton and west Binn paths, via Glebe Place and Grange Road.

We propose to develop the verge alongside the path and playing fields with seating and natural play features. We hope this will provide a space for outdoor education for the school, nursery and after school club, as well as somewhere for people of all ages to relax and enjoy the nature along the burn side. We propose to plant about a dozen additional native trees by the burn and try to create more diversity amongst the plants along the burn to attract a wider range of wildlife. We propose to erect three information boards to raise awareness of the history of the Cot Burn area and its natural features.

We have some funding set aside for our proposed project from Fife Council, which will cover the costs of initial vegetation management, removing the existing old fencing and replacing it, and tree planting. We have a conditional offer  grant funding from our main funders, Fife Environmental Trust. This is dependent on Planning Permission and contractor quotes for the path. We have recently secured an Active Travel Grant from Paths for All to help with the path costs, and to provide signage and some solar lighting for the new path.

We currently await news of Planning Permission and contractor quotes.

SEPA has clarified that the Cot Burn should not be contaminated by any industrial pollution and the pipes carrying treated water from Whinnyhall water treatment works at the east Binn do not run in the burn channel. (They run under the footpath.)

This little strip of burn side is a potential community asset: a place to relax and to learn, and a home for nature. 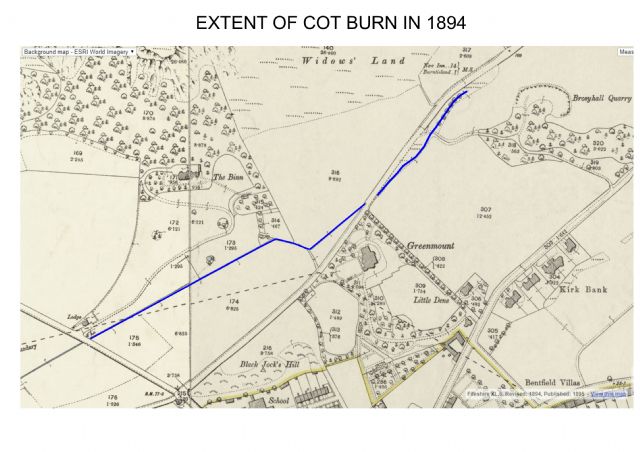 This shows the original extent of the Cot Burn from near the current golf course clubhouse to where it runs under the Cowdenbeath Road to become the Kirkton Burn after it is joined by other culverted burns from the west side of the Binn. The Kirkton Burn is now diverted into the SUDS by the ‘Alcan estate’ and reaches the sea from the old Seamill Pond by a pipe to the west breakwater between Ross Point and Colinswell.